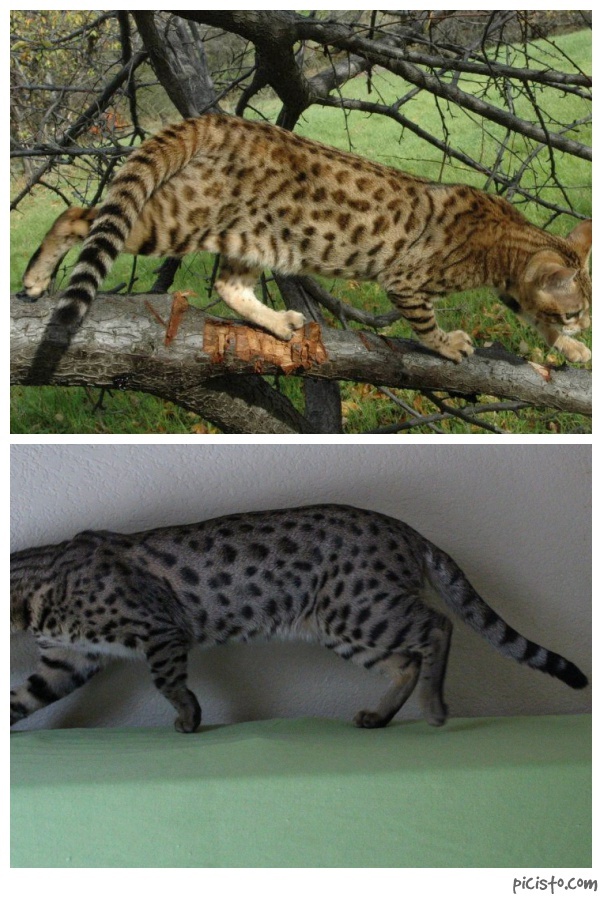 For cats who survive on their own hunting ability, the tail is a very important feature - especially for cats who primarily live in trees as they are jumping, climbing, and sometimes free falling in order to get where they need to go.  The tail must function as a counter balance in order to give the cat precision in its movement.  For domesticated cats who get their meals handed to them by their human servants each day, that tail is not quite so important.  Thus, domestication has moved the tail placement of cats since it no longer contributes to the cat's survival.

Look at the top picture in the collage.  Notice the spine goes straight back to the hips and then instantly to the tail.  If the cat were to stick its tail straight out behind it, there could be one straight line from the back to tail.  This is an example of poor tail placement.  With the tail set so high, it does not provide the correct center of balance to help the cat jump and land with precision.

In contrast look at the bottom picture in the collage.  Notice the tail is placed much lower on the rump.  The spine curves over the hips, then down and at that point the tail begins.  If the cat were to stick its tail straight out, it would not form a straight line with the back; there would be a slight curve downward before the tail begins. This provides a lower center of balance which is what the cat needs for the tail to properly function as a counter balance.

Remember you want the tail set low to provide a lower center of balance.