Bengals come in many different colors.  The three basic breed-accepted colors are brown, snow, and silver.  Fortunately, the Bengal's color genetics are not too complex, and a breeder who knows with certainty their cats' colors, both dominant and recessive, can predict the possible outcome of an upcoming litter. UC Davis has a simple process for genetic color testing, and if a breeder has any doubt regarding color, or wants to be aware of recessive genes, it is best to have a color test done.

With the recent ability to genetically test for the Asian Leopard cat agouti gene, the advancement in colors on the Bengal cats will likely more forward quickly.  The Agouti gene may unlock the secrets to helping us combine a yellow base coat with black and white markings where needed.  Currently, it appears that Apb is reacting with the Felis agouti gene by darkening down all the colors on a cat - both base coat and the markings.

The Brown Color Spectrum
While there are no official subcategories of the brown Bengal, the brown coat has the widest variety of shades.  Think of the color brown on a spectrum with grey at the coolest end and orange at the hottest end.  A Bengal's coat can fall anywhere within that spectrum and as long as it has a black tail tip, it's considered a brown (See the Dilute section for an explanation of why the browns must have a black tail tip).  Even though we don't officially break down the browns, Bengal breeders have many terms we use to discuss the different colors of brown. 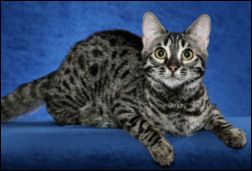 Gray Brown
The coolest colored brown Bengals have essentially a grey coat with jet black markings. Often these cats have at least one copy of the Asian Leopard cat Agouti gene called Apb.   This distinct contrast makes these attractive cats.  Ultimately, Bengal breeders would like all of their cats to have black on their face and Apb may be the way to get there. 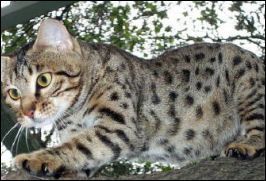 Sandy Brown
After they cold gray cats, there are cool browns or sandy browns - cats that aren't exactly grey, but still very cool in coloring.  I've worked a lot with these shades of cats because I often find their structure to be wilder than the hotter colored cats.  While certainly, the skeletal genes and the color genes are not attached, it's interesting to observe how some traits frequently show up together.

Tawny Brown
Adding more and more warmth to the coat, we will get cats with tawny or yellowish tones.  I really like this coloring on cats. It seems as if this color grouping could be influenced by the snow gene as many, but not all, of the cats with this middle brown shade - not too hot, not too cold - carry for the snow gene. 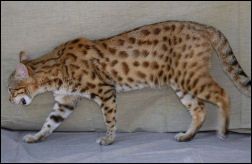 Brown
What I deem to be simply brown is a step above tawny, but definitely not highly rufoused orange. This is the color of many ALCs. I love this color because it provides depth on the finished cat. The struggle is obtaining it with black and white on the coat as well. In my perfect world, that would happen overnight, but it doesn't. 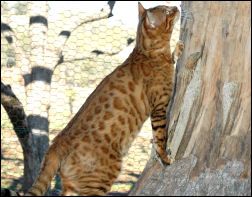 Sorrel
The brown spectrum ends with highly rufoused orange cats.  "Rufoused" means the coat has reddish/orange tones.  These hot colored cats are ideal for many people.  The struggle for the breeders is to keep the contrast on the hot cats.  Often their pattern becomes less defined with age as the colors blend together.  As a personal observation, I have found many of the highly rufoused cats to be more domestic in their skeletal structure than their cooler litter mates.

The Snow Color Spectrum
Snow colors were introduced through domestic cats Siamese and Burmese. However, they were accepted as a registered color so that breeders could produce a duplicate of the snow leopard.  While many breeders can guess a snow color, the most accurate way to determine color is through genetic color testing. 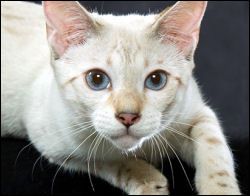 The Seal Lynx Bengal color comes from an outcross to Siamese.  Lynx kittens are usually born completely white and their pattern emerges with age.  While the Lynx can often be thought of as the snow with the least amount of contrast, this is not always the case.  The Seal Lynx Bengals are often sought after as they are the only Bengals with blue eyes.  If a Bengal displays color points (the Siamese pattern) it is considered undesirable in the Bengal Standard. 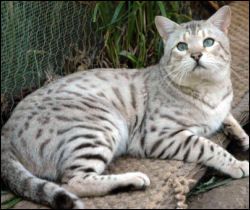 The Seal Mink
The Seal Mink coloring occurs when the kitten has one Seal Lynx gene and one Seal Sepia gene.  Think of the mink as the pink petunia with with one red gene and one white gene.  Seal Minks are born with a visible pattern.  While their eyes are usually an aqua green, they can be gold.  Eye color should not be used to determine coat color.  Since a Mink must have both the Lynx and Sepia gene, a brown cat cannot carry for the Mink gene.  If you're told that a brown carries for Mink, you are dealing with someone who doesn't have a clear understanding of genetics. 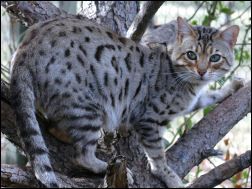 The Seal Sepia
The Seal Sepia color comes from an outcross to Burmese.  Seal Sepia kittens are born with a visible pattern, and their eyes can range from green to gold.  Within the sepia series, some cats can almost look like a yellow brown, while others, like the one pictured on the left, have a definite snow-like color with sepia markings. While they were originally thought to have the best contrast, all of the snows, if bred well, can result in good contrast.  Often the sepia colored cats have coats that most closely resemble the colors of the snow leopard as there is a gray-yellow tone in a snow leopard's base coat to allow it to blend with the rocks while they aren't covered in snow. 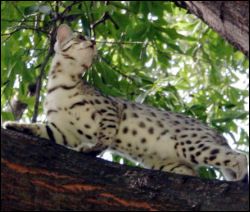 The most recently accepted color in the Bengal Breed is Silver.  Silver was introduced to the breed by out crossing to the American Short Hair.  Much controversy surrounded the inclusion of silver as an acceptable color as it does not occur in any wild cat species.  However, the popularity among breeders and pet buyers ultimately resulted in the inclusion of the silver color.  The Silver Bengal has a silver to almost white base coat with black markings.  Silvers can have what breeders refer to as tarnish, brown tips on their silver coat, which is not desirable in the color. 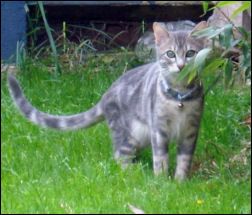 Bengals do come in a few more colors; however, they do not meet the breed standard.  There is certainly nothing wrong with these cats; however, they cannot be shown as a standard Bengal. The most frequently found non-standard color is blue.  Blue has been in the breed from the beginning in the hybrids Jean Mill received from Dr. Centerwall. We are also starting to see chocolate and cinnamon Bengals which can be distinguished from traditional brown by the absence of black anywhere on the body, most notable on the tail tip. Bengal breeders will likely be faced with the question of whether or not to accept these colors.  It is a difficult decision as the colors themselves do not lend them to meeting the requirement of contrast on a Bengal coat.