What two Bengal cats are best together - two girls, two boys, or one of each? 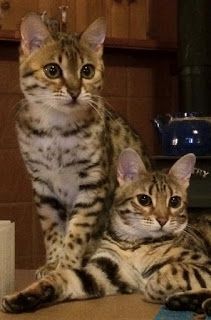 Because Bengal cats are social animals who often don't do well as the only pet in a household, people often want to adopt two kittens at one time.  It seems everyone has an opinion on what genders make the best pair - including us.  We have always recommended two males or a male and a female, but not two females.  But this opinion was based on anecdotal evidence - our experience - not research.

Upon looking into it a bit, it turns out that the College of Veterinary Medicine at the University of Georgia did a study on sixty pairs of spayed and neutered household pets and published the results of this study in an article titled "Gender differences in the social behavior of the neutered indoor-only domestic cat" in the July 1999 Journal of Applied Animal Behaviour Science.  Before this study, all of the information gathered about domestic cats' interactions had been done on feral cat colonies with entire cats. In cat colonies, females form groups, and males roam solitarily from group to group.  Males regulate their interaction with other males by avoiding them, and it was assumed that desexed cats would follow suit, but that didn't end up being the case.

The study analyzed 60 pairs of desexed cats: 20 male/male pairs, 20 male/female pairs, and 20 female/female pairs. The results were measured in three different categories: affiliative behaviors, proximity, and aggression.  Affiliative behavior is cat body language that encourages harmony in the relationship.  This can be approaching one another amicably, grooming one another, rubbing their head on one another, sniffing socially, or blinking slowly - basically, a cat's way of saying, "I love you."  Proximity is how much time the cats spend within sight of the other cat. Aggression measured how often the cats had an aggressive encounter.

The three different groups of cats had no measurable differences in affiliative behaviors or aggression. So, no matter the pairs' genders, they were equally kind and equally disgruntled with one another. The one place there was a sizeable difference is proximity. Male/male pairs spend significantly more time within sight of one another than male/female pairs and female/female pairs. While we do not quite understand what causes this difference, it may relate to the fact that males do not spend much time in the proximity of another male in feral cat colonies. Therefore, male cats have more body signals to indicate that they are not a threat. It is theorized that because males have more ways to communicate a lack of desire for aggression, this may benefit them in a household situation. 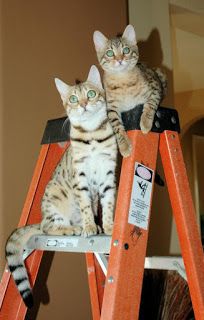 So, if it isn't gendered that affects these behaviors in spayed and neutered cats, what is it? It is mainly the amount of time spent together and the number of desirable territories that greatly impact the harmony in a pair of cats' relationship. The number of aggressive interactions a pair of cats had with one another each day decreased with the amount of time they had lived together.  As cats grow old together, they engage in fewer aggressive behaviors.  When the cats did engage in aggressive interactions, it was largely based on territory.  If there was one preferred resting spot, the aggressive interactions tended to happen most frequently around it.  Bottom line, the more preferred resting spots you provide in your home and the longer your pair of cats is together, the more harmony there will be in the relationship.

What if you want to introduce a new cat into a home with pre-existing cats?

If you are getting both cats simultaneously, gender does not appear to affect the amount of harmony in the relationship, so you are free to choose whichever two kittens strike your fancy.  Just make sure that you have enough desirable sleeping stations placed around your house to keep the peace.

If you already have an adult female cat at home, we do not recommend getting a new female.  Think of how it would work in nature. A female has a territory and protects it from others; whereas, a male wanders from territory to territory. Therefore, females are more territorial gender. It is not in their nature to share space.  It is in their nature to protect and claim space.

We have several adult female cats co-existing in our home.  We make it work by having an established peaceful matriarch who keeps the peace in the house.  Without her, our peaceful community would crumble as the other female cats scrambled for the top position.  Over our years of breeding, we have made a mistake (twice) of retiring a peaceful matriarch.  We will not make that mistake again.  Our current matriarch is now spayed, but she will live forever in our home as she has a vital role in our cattery.  If the female in the top position were not a peace-keeper, then there would be constant group problems.  Even so, it is harder for us to bring in a new female kitten than it is to keep our own female kittens and allow them to learn our hierarchical system from infancy.

In general, there is a lower chance of successfully integrating a second female into a home with a pre-existing female.  This does not mean it doesn't happen.  A lot will depend on the personality of the two cats.