Rule of Thirds - The Back Skull 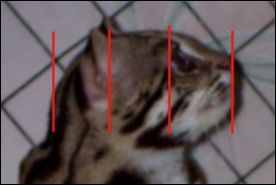 The Rule of Thirds was originally taught to me many years ago by Les Hall from Junglebook Bengals.  Les was known for breeding Bengal cats with wild essence.  Her cats looked like small forest-dwelling wildcats.

The Rule of Thirds helps one understand where the face's features should belong when looking at the cat in profile.  To make it easier to visualize, I rotated this Asian Leopard cat's profile picture to make his back skull and his muzzle be straight up and down.  If you apply the rule of thirds to the heads of the small forest-dwelling wildcats, you see the features up in the following segments: the eyes and muzzle unit are on the first third.  The forehead is on the second third, and the ears and back skull are on the last third. 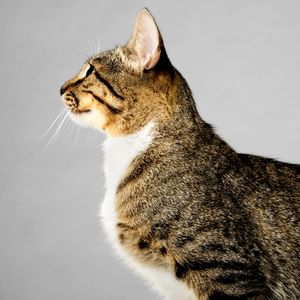 Domestic cats have lost the back skull because they do not need the same musculature in the jaw for a strong kill-bite. All of those muscles in the wildcats are attached to a crest of bone at the back of the head, Known as the sagittal crest.  All wildcat species have a sagittal crest to have enough space for these powerful muscles to attach.  However, the domestic cat doesn't kill its meals each day, so the need for powerful jaw muscles has gradually disappeared - with the crest and the back skull often disappearing with it.  Look at the picture of the domestic tabby.  In comparison to the Asian Leopard cat, it has a minimal back skull.  The back of the skull drops off before the back of the ear bulb. The neck appears to run straight into the back of the ears.

Can you identify back skull of a kitten?  Yes, you can.  Pictured below are two sisters.  The sepia is on the left, and the mink is on the right.  You can see in the profile pictures that the sepia kitten has the correct skull proportions when following the rule of thirds.  The sepia kitten has back skull.  The mink kitten on the right does not have a lot of skull behind the ear bulb.  Notice the dramatic difference it makes from the front view - paying close attention to how it affects the appearance of ear size.

Who knew?  It seems that every Bengal breeder is looking for smaller ears, but maybe what they really need is more back skull. 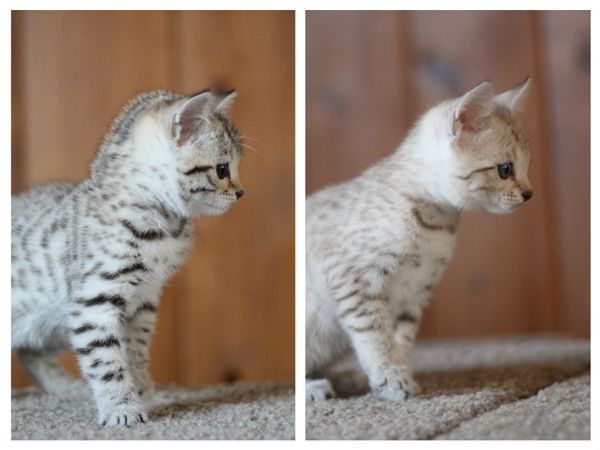 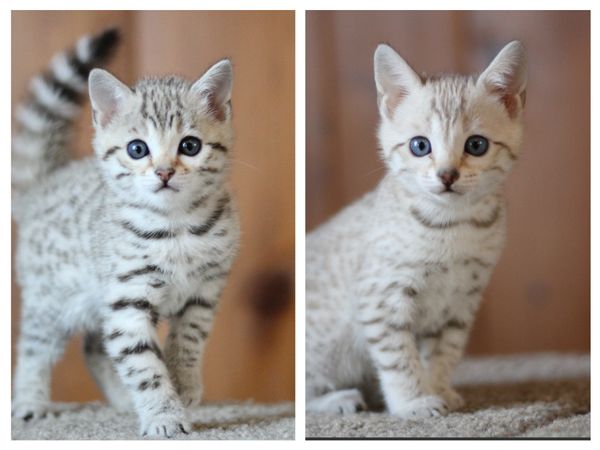